Melee match for the 2017 winter season

The final Prospect Petanque Melee match for the 2017 winter season was played on Wednesday September 6.

Despite it being spring, the cold winter weather persisted, although brightened up by a full moon occasionally visible through the clouds. Almost twenty members enjoyed the night, including Tory and Lionel making a welcome return home from their international season. 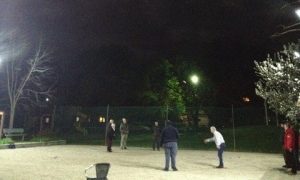 Games for the Winter 2017 Super-Melee Final Round

Chef Alan served chicken schnitzel from the bbq, and John brought along a wonderful batch of scones that Heike had made for us. The results of the winter Melee will be announced at the first match of the new season on October 4. Alan suggests that there may be a crab feast that night, if conditions are favourable.

With great relish, Alan announced that he had successfully picked Melbourne to come 9th in the AFL draw. However, so had Wendy and David Palmer, and so the prize money was divided three ways. For the rest of us: better luck next time.

Winners of the AFL 2017 draw : David Palmer and Alan Matthews

Currently President of the Prospect Petanque Club in Adelaide South Australia. Registered member of the Club 21 years, and a committee member for 21 years filling the role of President 7 years, Secretary 3 years, Treasurer 2 years. Age 71 years.
View all posts by ziggy →
Bookmark the permalink.

This site uses Akismet to reduce spam. Learn how your comment data is processed.